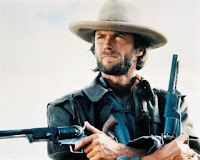 This movie was so unremarkable that I really don't think I would be able to pull it out of a line up.  It makes me wonder how it managed to earn a 1001 spot.

Josey Wales' family is murdered by Union soldiers.  He is driven to revenge and joins the Confederate Army.  Then he is further driven to revenge when his officer betrays their regiment.  Let's take it easy on the motivation, shall we?  Anyway, I am pretty sure that even someone who hadn't seen this movie could map out the rest of the plot.

I don't have a whole lot to say about this movie.  I suppose it wasn't awful and I definitely liked it better than High Plains Drifter (guys, the hero doesn't rape anyone!  It's a miracle). Maybe I have seen too many Westerns at this point, but this was completely forgettable for me.

Eastwood's favorite film that he made.  Um, why?