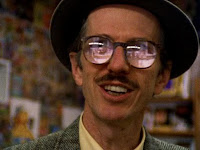 I am only familiar with Robert Crumb because of his "Keep on Truckin'" drawings.  After seeing this film, I am decidedly not a fan.  I still enjoyed the documentary but I did feel the need to take a shower after watching this.

The film gives us a glimpse in the life of Robert Crumb, who rose to fame as a controversial cartoonist. The controversy comes from his depiction of women in his comics which is...disturbing, to say the least.  It is so disturbing, in fact, that I am sure many people will claim it was satire.  Whatever it was, I think it revealed a rather disgusting mind.  We also learn about his brother Charles, who committed suicide before the film's release.  Charles lived with his mother his whole life, seemingly to avoid acting on his "homosexual pedophiliac tendencies."  Damn.

These people are seedy, but I felt even seedier for watching them with such horrified fascination.  It was certainly interesting, but I am still unsure if I would recommend it.

After Charles Crumb's suicide, his mother threw most of his artwork away.
Posted by Amanda at 12:48 PM