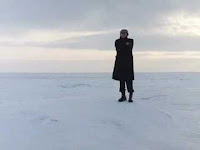 I often throw a tantrum over biopics, as they are generally a hundred hours long and incredibly boring.  This was actually an interesting format, but unfortunately, it couldn't sustain a ninety+ minute feature.

Glenn Gould is a famous pianist.  This is a bit embarrassing, but I had never heard of him before.  My knowledge of classical music consists of a symphony that I went to with my brother once.  We left halfway through, because we wanted candy.  Obviously, I am no authority.  In any case, the film consists of 32 short movies, ranging from six minutes to one minute.  Each has a distinct style that represents one aspect of Gould's life.

Some of the shorts really worked for me, others not so much.  I suppose the entire thing would have interested me more if I had the slightest inkling who Glenn Gould was.  While this film is mildly entertaining, it is not exactly an education.

Sorry for the lackluster review but it was a rather lackluster movie.

Based on Bach's "Goldberg Variations" which are 32 pieces of music that are usually played together.
Posted by Amanda at 8:17 AM