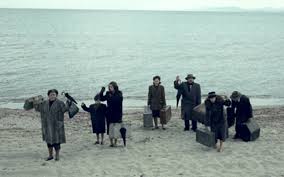 It took me about two hours to find this movie.  I have no idea how I finally stumbled across it (I think I sold my soul at some point).  Then it was another FOUR hours of one of the dullest films I have ever seen.  At this point, that is saying a lot.

What even happened in this film?  A group of Greek actors would start dancing and performing.  Then, a group of soldiers would hold them at gunpoint.  Somewhat would get shot and the cycle would continue, punctuated frequently by folk songs.  That, at least, was my understanding.  Of course, there was a lot more to it than that.  I told myself it would be better to watch this in one sitting, as that is how the director intended the film to be viewed.  I think this was a misstep, because at about hour two I couldn't have care less what was happening on the screen.  Actually, to be honest, by minute two I couldn't care less what was happening on screen, but I at least tried to understand until the second hour.

There were so many times that the characters broke into songs.  Maybe if I was Greek I would have felt a bit more of a connection to the music.  Personally, I felt like the interruptions were incredibly obnoxious and made it even harder to follow the plot.  Definitely not worth my time.  Do the Listmakers hate me or something?