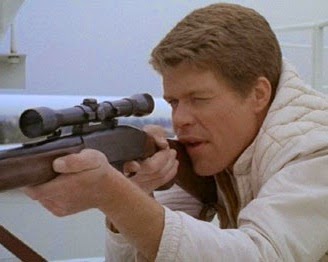 We finally get to a really good film after a string of absolute snores.  I have never heard anyone mention this film before in my life, but it turned out to a really great find from The List.

The story revolves around a young Vietnam veteran who kills his mother and wife before going on a shooting spree at a local drive in.  Meanwhile, a faded movie star struggles to be relevant (or as I call it, The Robin Williams story).

I am fervently against acknowledging mass shooters or romanticizing them in fiction.  However, this film's depiction of the killer, who is loosely based on Charles Witman, is very artfully done.  I was entertained and interested the entire time, without feeling like the filmmakers were glorifying anyone or promoting anything.

The use of Boris Karloff is absolutely brilliant and kind of made me miss doing earlier films.  It is a pretty upsetting film, but a very successful thriller.

Boris Karloff lived just long enough to see the finished film and receive the praise he deserved for his role in it.