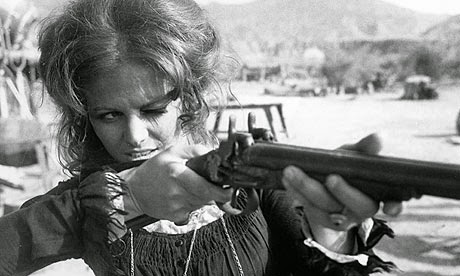 After a string of "I guess I can see the merit in that" movies, we finally get to a really great film.  Not only is Henry Fonda a bad guy (really take a moment to let that soak in people), but women are only slightly degraded!  That is a big step up for westerns, ladies and gentlemen.

A railroad tycoon sends the evil Frank to bully a landowner into selling his land to the railroad.  Frank ends up killing the guy's entire family instead.  Whoopsies.  Anyway, it turns out the landowner had a new wife, a former prostitute (and I thought meeting guys on Tinder was embarrassing) that actually inherits the land.  What a silly misunderstanding!  Meanwhile, Frank is being pursued by a mysterious man with a harmonica.

Like I said, this is just a fantastic movie that I think is even better than The Good, The Bad, and The Ugly.  I always love a good revenge tale and that is just a small part of this great story.  The action is great without being upsetting, the characters are well rounded and interesting, and, of course, the style is beautiful.

One of the best westerns I have ever seen.  Check it out!

One of the actors that played a gunman committed suicide after a day of shooting.