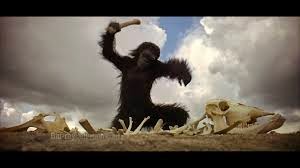 So since we warmed up with a nice dull Bergman film for the last entry, why don't we tackle the epitome of boring films: 2001: A Space Odyssey?  Don't worry, there is another Bergman after this that we can use as a cool down.

In the history of uninteresting movies, this one might have the most promising beginning.  The opening scene is so iconic that it should be the one scene you don't fast forward through. The 140+ minute film centers on a manned expedition that is slowly derailed by the spaceship's unbalanced computer named HAL.

I feel like the concept of a computer becoming dangerous has the potential to be a mediocre sci fi film.  However, that is not the direction Kubrick takes with it so it is simply a terrible and pretentious horror.  I am not referring to the horror genre here; I am referring to what I felt every time I would glance at the screen.

Some people, of course, think this is a masterpiece and I can see where they are coming from (most likely a very high horse).  Cinematically, it is quite beautiful.  But honestly, I am more of a story person.  And less of a no compelling story at all person.

241 people walked out of one of the first screenings.

There is 24 minutes of footage before there is any dialogue in the film.