Planet of the Apes
1968
Directed by Franklin Schaffer 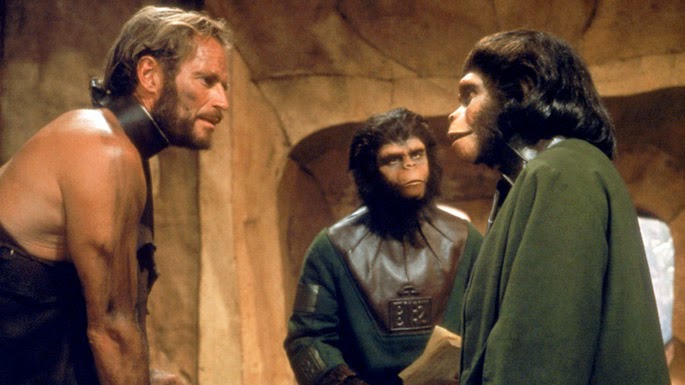 Isn't there yet another sequel coming out soon?  Ugh.  Give it a rest already.  It is good, it's not that good!

A crew of astronauts have been traveling for eighteen months through hyperspace (so it has actually been like a thousand years because science...) when their spaceship crash lands on an unknown planet. After a group of humans raid their camp, they quickly realize that apes in charge of the entire planet, while humans are hunted, killed, or captured.  Guess which one happens to the black guy!  Guess which one happens to the heroic white guy!  Go on, guess!

If you are a frequent reader of this blog, you might already know how I feel about Charlton Heston.  He is a boring actor to watch, even when he is competing with Al Pacino for the Most Overacting Actor of All Time.  That being said, this was probably the best film I have seen him in.  The fact that this movie isn't just unforgivably silly because of the costumes is a great accomplishment.  I even thought some of the apes were hot.  Too much information?

In any case, this is a great and entertaining film, even if you aren't into science fiction as a rule.

One of the first films to profit heavily from merchandising.

Ingrid Bergman was offered the role of Zira originally but turned it down, a decision she regretted in later years.