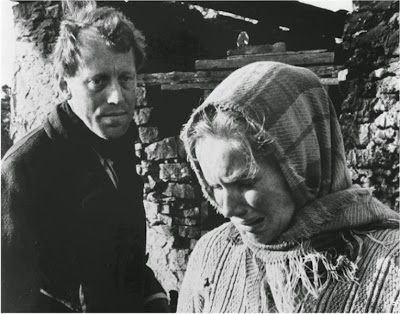 My frequent readers (and even my non frequent readers since he is constantly appearing) know that I am not a fan of Bergman.  I simply don't like his style and I find his movies to be a power sleeping aid.  Unfortunately, I have to keep repeating this and you have to keep reading it because he WON'T GO AWAY!  Attention Listmakers: if a set of films are all the same, one is enough!!!  I know the plots can be drastically different, but somehow or another we always end up in the same place: watching a sad man having some sort of weird dream.

Okay so Through the Wild Hour of Persona Shame follows a couple whose lives are completely destroyed by the war as each are forced to look at the other in a new, harsher light.  I know that is an incredibly broad summary but I can't really think of another way to write it without spoiling anything.

I am sure both Larry and Ray will be able to explain this film better in the comments section, so perhaps I shall leave it to them.  I will say that this movie certainly succeeds in being disturbing.  The casting was quite brilliantly effective. Every time Liv Ullman was on the screen I felt vaguely upset; she is so innocent and beautiful!  So in that very tiny, tiny way I will give Bergman credit; I really felt connected to the characters.  There, I was nice.  Gentlemen, take it away.

Bergman was unhappy with this film and felt like it came across as poor and uneven.  I could kiss this man.  Yes, I agree, Ingmar!