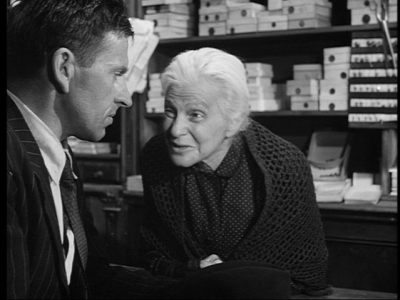 I keep mixing this film up with The Shop Around the Corner, which is very bad, considering one is about the Holocaust and the other is a light romantic comedy.  If I say that The Shop On Main Street is hilarious, I might get some unwelcome attention.

Anton Brtko is told that he must take over the shop of an old Jewish woman in an attempt to Aryanize the town (pretty sure I just made that word up).  He convinces the woman that he is her nephew and that he has come to help her.  All hell breaks loose.

There seems to be around a hundred films about the Holocaust in The Book and I think that I have gotten something unique out of each and every one of them.  I loved watching Anton struggle with what to do, particularly because he would go back and forth so much.  That to me is so much more realistic than a character just saying "well, I am going to be a hero now" and never doing any wrong.

I will say that this film had a few stretches where nothing much happened but I guess the chaos at the end made up for it.  Highly recommended.