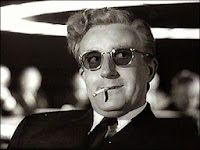 That was...odd to say the least.  A comedy about the US Air Force killing everyone in the world.  And Peter Sellers plays multiple roles for some reason?  Okay...

So I will start by saying this film really is not my cup of tea.  For some strange reason I find all Kubrick films incredibly dull.  I think it is because the first one I saw, A Clockwork Orange, had a rape scene in it and I kind of shut down and hated the rest of the movie.  The next one I saw, 2001: A Space Odyssey, was so boring that I am pretty sure I listened to music during the film.  After all that, I just can't seem to find any of his movie entertaining.  I also don't really like war movies in general.  So when I say I didn't like this film, that does not mean that you shouldn't see it (because I know everyone takes my words to heart and blindly follows them).  It just means it is not for everybody and it is certainly not for me.

General Ripper, who for some reason seems to be losing his mind, orders the US to attack the Soviet Union with B-52 bombers for no reason in particular.  Ripper is the only one that knows the recall codes.  Hilarity ensues.

This was an interesting satire about Cold War paranoia but I felt Kubrick inserted a lot of stupid, mindless jokes in the mix (Strangelove's hand for instance) to appeal to wider audiences.  So it misses the mark of being a smart comedy by a bit.

Overall, I am never going to be a Kubrick lover so if you are you might just want to skip these reviews.

Sellers improvised most of his lines.