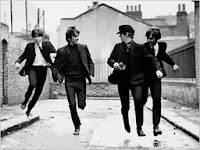 This is such a strange movie and I can't see anything like this being made today.  The film stars The Beatles as themselves, though it is scripted, and follows a "typical" day in the lives of the singers, which apparently for Ringo includes getting arrested with Paul's grandfather.

Okay, seriously, who doesn't like the Beatles?  I feel like if someone told me they didn't like their music, it would take a lot of convincing on their side to make me believe they weren't simply trying to be contrarian.  And, although this is more of a topic for my music blog, A Hard Day's Night was one of their best albums and with this film we get to experience all of our favorite songs.  On a side note: Rubber Soul will always be my favorite Beatles album.

Surprisingly, this isn't just random clips of our favorite superstars with a Beatles album playing in the background.  It actually works great as a comedy and I was laughing out loud at several points in the film.   The experience was a bit bittersweet since the happy camaraderie between the four of them clearly didn't last.

I have never seen one of the concert movies on current singers which are quite popular now but I can pretty much guarantee that they are nothing like this, which is a damn shame.

The people chasing The Beatles at the beginning are actual fans.

Ringo was heavily hungover during the canal scene.