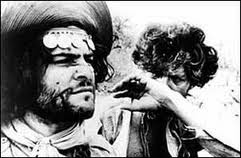 Well, it has been a tough week and I have had a nonstop stream of work that I have to do.  But hey, at least it doesn't interest me in the slightest.  So I apologize for not posting.  Rest assured, there will be a ton of movies coming your way soon!

This is another brilliant discovery that I never would have made without the list (it is a good thing too that I liked this movie; I have been so stressed this week I might have chucked the computer out of the window if it had displeased me).  I was immediately hooked; this film has one of the most beautiful, haunting soundtracks I have ever heard.  We also get gorgeous shots of Brazil's landscapes.  In fact, the movie is so pretty that I would probably be able to forgive it if the plot was terrible.  Fortunately, that was not the case.

Manuel is sick of his boss cheating him out of money and whipping him so he decides to kill him (although it is clear that the actor never makes contact with the boss when he is beating him so I suspect he possesses telekinetic powers).  Manuel then goes on the run with his wife Rosa, who also kills a couple of people in order to survive.  Oh and there is also an extremely creepy priest.

A couple going on a killing spree is now a rather common plot line (why I have no idea) but this film still managed to interest me.

So this movie is more than just a pretty face and is highly recommended.

Del Rey insisted on actually carrying a rock that weighed over twenty kilos up the mountain and couldn't show up to work for two days.