Prima Della Rivoluzione
Before the Revolution
1964
Directed by Bernardo Bertolucci 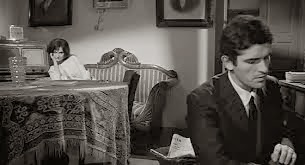 We once again must rely on my horrible French since those are the only subtitles I could find for this Italian film.  Merde.  Unfortunately, I was able to understand this film, which means I couldn't just make up my story as boring images filled the screen.  Personally, I would have chosen to not make the romance between a guy and his mentally disturbed aunt but whatever.

It seems like I have a thing against foreign films.  Some of my favorite films are foreign!  Okay, that sounded bad.  I think it can be harder to pay attention to movies if they are in a different language.  But I do enjoy a lot of foreign films and hopefully, we will get to some of those.  For now, though, we are stuck with obscure bores.

I absolutely hate Bertolucci, I thought he was an indulgent director with 1900 and twisted with Last Tango in Paris.  After reading about how he behaved with the cast for Last Tango, he may very well be monster.  But more on that when we get to that film.

Usually a dull story can be saved with brilliant cinematography but I was disappointed with that aspect as well. Just skip it.  Of course, you probably have never heard of this movie so this should really have no bearing on what you do.

Bertolucci was 22 when he made this.  Well, we all do stupid things when we are young.
Posted by Amanda at 9:49 AM