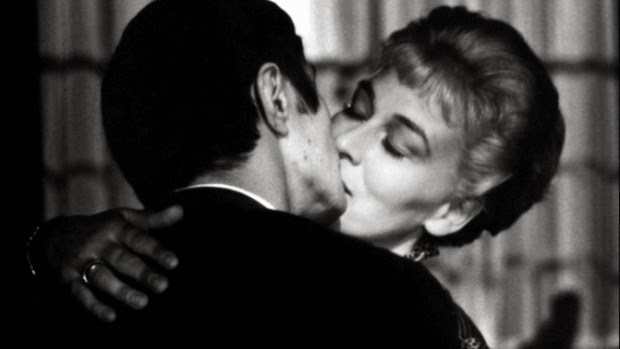 Seeing Dreyer in The Book again was like running into someone from your old high school.  For a moment I was like "oh you still, exist!  I mean, it is great to see you!"  It was nice to see Dreyer again since it provided us with what I think is the greatest silent film of all time: The Passion of Joan of Arc.  Still, the reunion was a little...awkward.

Gertrud begins the film by telling her husband that their marriage is over and she is in love with someone else in an excruciatingly long take.  It turns out her lover is kind of a jerk, but that's okay because every man in this movie seems to be in love with her.  Next!

Like I said, the takes are painfully long and almost have an Ozu-esque feel to them.  This worked extremely well for the scenes in this film.  This is particularly true for the scene when Gertrud tells her husband it is over; we feel a bit of the pain and horror that her husband is feeling at that moment.

Still, this film is not without its flaws.  For one thing, we are never given to understand why everyone is so obsessed with Gertrud.  I get that she is pretty but she is such a bitch!  I suppose that is more of a flaw of the male gender than the film, though.

I feel like I am always saying this but some parts definitely could have been cut out.  I swear I am not that impatient but a two hour film about the same silly woman is tiring.

Overall, worth a watch but there is a lot of dead time.

Only 90 shots and one exterior shot.