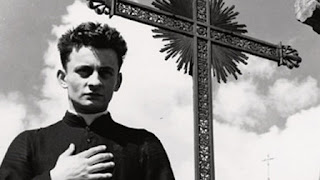 I have discovered another block of films that I have seen in The Book, which means another flooding of posts.  I have no idea why I have seen so many early fifties films.  Obviously, catching up on this blog is much more important than the other work I have to do, so here we go.

I don't know the movies have been hard to find lately, but I was forced to go to another less than reputable site to find this one.  This book makes me do bad things!

This film is about a country priest who struggles with his faith.  He is pretty much one of those annoying people who will not leave you alone about your religious beliefs.

Obviously my description doesn't sound too exciting.  I actually found the movie to be quite boring and the main character to be obnoxious.  I was so puzzled as to what to say about this film that I googled it and found a fantastic review by Roger Ebert.  I say fantastic because he is a great writer, not because I agree with his views on the film.  Apparently, this is one of the greatest Catholic movies of all time.  I wrote a paper my junior year of high school about why the Catholic Church is evil.  Maybe that is why this film didn't click with me.

Ebert also commends the fact that the main character rarely smiles and is dead serious the entire time.  All right, I guess.  Is that really a reason to watch a movie?  Nobody smiles?

Overall, I feel like I missed something when watching this movie that other people seem to get.  This could be owing to my stupidity but I think it has more to do with the fact that the film is a major snore.

The main character is supposedly an inspiration for Travis Bickle's character in Taxi Driver.