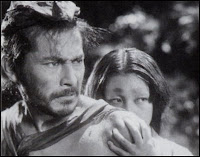 I read the trivia for this movie before I watched it and I immediately knew I was in for a treat (scroll down to see why).  Japanese cinema is always a treat.  Recently at a family dinner I said that my favorite action movie was Seven Samurai and I was practically booed out of the room.  But haters gonna hate and these movies are awesome.

A samurai is murdered in the forest.  A priest, his wife, and a woodcutter are all witnesses to the murder.  We hear and watch each of their stories, with the plot being slightly different each time depending on the person's agenda.  This kind of unreliable narrative has been done many times since (I was about to give some examples but I don't want to ruin any movies for you).  Actually, it was done before in Citizen Kane but Kurosawa swears he  saw Citizen Kane for the first time two years after he was done with this film.  Either way, it is extremely well done here; each time you watch the story unfold, your perspective changes until you mind is blown and you can't do anything productive for the rest of the day.  At least, that is what I am telling myself.

So the story is intriguing and entertaining until the last minute.  The actors are all excellent as well though her eyebrows are really weird; check it out: 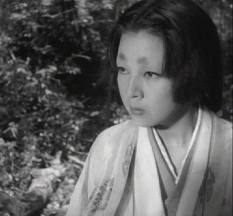 But I digress.  Finally, the directing and cinematography are truly inspired; the film is beautiful 100% of the time.  A must watch movie.

Slugs kept raining down from the trees so the cast and crew had to slather themselves with salt to keep them away.

The word "Rashomon" was recently added to the Oxford English Dictionary with the definition "of or relating to the film Rashomon.

First time someone pointed the camera directly at the sun.

To make the rain show up against the backdrop, the crew put black ink in the rain.  This is clearly visible on the cast's faces in some scenes.

Often cited as the reason the Academy added The Best Foreign Film category.