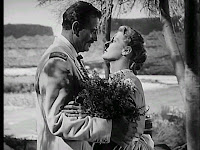 Anyway, when you look at this film objectively, it is just awful.  We all know that John Wayne makes a better icon than an actor.  There are also really random musical numbers sprinkled throughout this film.  It also is extremely racist, with the Apaches being depicted more like demons than humans.

However, people tend to never look at westerns objectively. Westerns often remind us of parents or grandparents.  This sentimentality we associate with westerns make us excuse all its faults and just have a good time with it.  I am not saying this is a bad thing.  On the contrary, I had a lot of fun watching this with my parents despite all its flaws.

I should mention that the stunts done with the horses are mind-blowing (I actually gasped a couple times) and the scenery is, of course, beautiful at times.  Curl up with some relatives and enjoy the film.  It actually would make a good Thanksgiving film; goes with the theme of mass genocide!

John Wayne considered this a parable for the Korean War.

One of three films from Ford's cavalry collection.
Posted by Amanda at 5:14 PM