All About Eve
1950
Directed by Joseph L. Mankiewicz 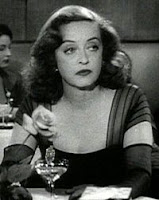 Surprisingly enough, Bette Davis does not play the title character.  Eve is actually played by Anne Baxter but when you are talking about this film Eve is quite inconsequential.

This movie is about…well, it is kind of hard to pin down this movie's plot summary in a couple sentences.  I will do my best.  A young ingenue becomes part of a group of showbiz friends.  Lies, betrayal, ruthless ambition, etc.

This is an extremely quotable film (most notably, of course, the bumpy night line) and the acting is flawless.  Shout out to Marilyn Monroe, though she is only in it for a few minutes, is extremely radiant and talented.

This is one of those movies that is so famous and critically acclaimed that it is hard for me to do a good review of mostly because so many people that are more talented than me have already written in depth analyses that my review couldn't touch.  I have never even taken a film class!

It is a dark film but a brilliant one.  Go to Roger Ebert's blog if you want depth!

Bette Davis' croaky voice was due to the fact that she burst a blood vessel yelling at her soon to be ex husband.  Yikes.

Davis fell in love with costar Gary Merrill during filming.
Posted by Amanda at 6:05 PM