In a Lonely Place
1950
Directed by Nicolas Ray 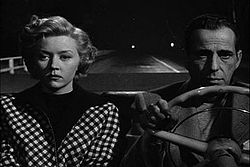 This is an incredible film that I have had never heard about until today.  There are some pretty big names associated with it so this could be due more to my ignorance than the obscurity of the film.  Still, this is movie is now possibly my favorite Bogie film (although it is a tough call between this and African Queen).

This story is about Dixon Steele, a screenwriter with a nasty temper.  He is a suspect in a murder involving a young woman but is saved from being arrested by Laurel Gray, a neighbor who gave the police a statement about where he was during the murder.  They, of course, fall in love as attractive people in movies do.  Soon, however, she becomes more and more scared of him and his temper.

Where to begin?  This is one of the best movies I have seen in a long time.  The acting is incredible, of course; Bogie plays perhaps the darkest character of his career so well that I even I was afraid of him.  Gloria Grahame, a rather underrated actress, is also amazing.  By the end of the film, she had managed to make me really emphasize with her character.  Though I was never in such an extreme situation, I too have been genuinely frightened of a man but at the same time I wanted to spare his feelings.  Scary situation.

The dialogue is also incredibly; my favorite line being something that Bogey's character writes: "I was born when she kissed me.  I died when she left me.  I lived a few weeks while she loved me." Truly an amazing film that is both dark and exciting.

Gloria Grahame was separated from her husband, the director, during filming.  She later ended up marrying her stepson (?).

In the book, Steele was a serial killer and a rapist.

People who knew Bogie thought that this role was closest to how he was in real life.  Yikes.