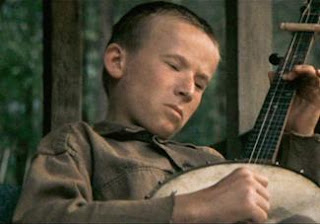 Ugh.  Let's get this over with.

Four businessmen decide to canoe down the a Georgian river for the weekend.  They are attacked by hillbillies.  Do I have to go on?  Sexual violence and just plain old regular violence ensues.

Honestly, is this what movies are supposed to be?  Being like Ed, strapped to a tree and forced to watch unspeakable acts of violence?  No.  At least Roger Ebert agrees with me on this one.

Over thirty people drowned trying to recreate the characters' adventures after the film's release.  What.