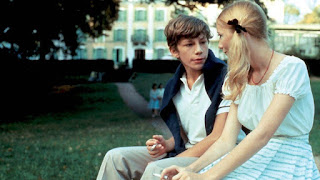 I am pretty sure my sister thinks I am a bit of a pervert for saying this (and maybe for a myriad of other reasons) but I am going to go ahead and say it anyway: I loved this film.  The fact that the director took a subject like incest, which almost everyone believes is disturbing or disgusting, and made it into something actually beautiful was amazing to me.  What also amazed me was what an astonishingly bad kisser the main character was.  But we shall get there.

Laurent is a fifteen year old school boy, who is a pretty typical French kid.  He gets sexually harassed by a priest, compares his penis size with his brothers', visits a brothel, and believes that any woman who isn't interested in him is a lesbian.  Once he develops a heart murmur, his relationships begin to change.  However, he is still consistently kind of a dick.

What did I like this movie so much?  It seems like the sort of thing I wouldn't like.  Maybe I had such low expectations for it that it was impossible not to be impressed.  I was picturing something gloomy and depressing because, let's face it, any film with European schoolchildren is generally pretty dark.  But I loved watching these characters; I loved how they viewed everything with laughter without ever crossing over into being glib.

Overall, I adored this film.  It reminded me that The List can still surprise me with treasures like this.

Louis Malle based much of the film on his own experience.  Which, presumably, did not include incest.