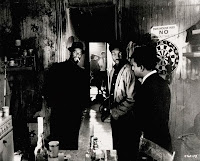 Up until today I had never heard about this film and I am guessing that most of you haven't either.  This is a semi documentary and you would think that if it was really influential, it would be more famous.  Still, it was a semi fun watch but nothing that I would recommend.

This film follows the Royal Pythons which is a street gang in Harlem.  Most of the movie centers on the character Duke, who wants to get a gun so he can become the leader of the gang.

Let's start with the positives.  It was interesting how Harlem seemed completely detached from the United States, like it had its own set of rules.  It seemed like whoever had the biggest gun was the leader and no one had any hope of getting out.  Needless to say, it wasn't exactly an uplifting watch.

Now with the negatives.  First of all, I could have chopped some time off the film.  It got a little tedious toward the end.  Additionally, and this is probably because I watched it in 2013, there was no shock factor here and the movie had nothing that I hadn't seen before.

So an obscure film and obscure for a reason.

A lot of the cast members were actual members of the Royal Python gang.