The Birds
1963
Directed by Alfred Hitchcock 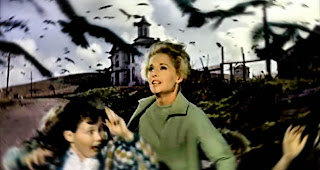 A frequent reader of the blog might be getting sick of me gushing over Hitchcock.  Unfortunately, you will have to endure some more fangirling on this post, but don't worry: both Marnie and Frenzy pissed me off a bit.

Anyway, the plot for this movie is pretty simple but completely brilliant.  For a reason that is never explained, birds start attacking everyone.  I blame this film for my fear of pigeons.  I have also had frequent dreams where I have to battle birds.  But let's shelf my weirdness for now.

This is a great thriller that borders on horror without ever crossing the line (except for one scene where they should two people with their eyes gauged out, but my sister always covered my eyes for that part so no worries).  Tippi Hedren is great in this movie, probably because after working with Hitchcock, she knew what it felt like to be terrorized.

I was glad that we were never given a reason why the birds started attacking everyone.  The best they probably could have come up with anyway would probably be some disease or radiation, which would have ruined a great action film with a lame explanation.

Another great Hitchcock and probably one of my favorites.

Speakers were put in the trees that emitted screeching bird noises to scare the audience outside of the UK film premiere.

HITCHCOCK RADAR: At the beginning of the film, walking out of the pet shop.

Hedren had several injuries from the bird attacks during the filming of the movie.