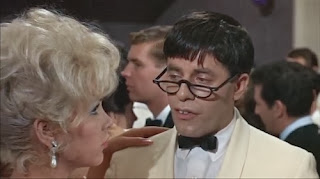 Most people know the movie The Nutty Professor as, well, this: 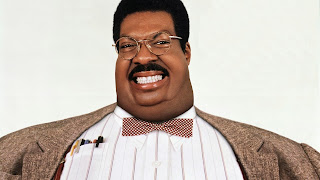 Unfortunately, the truth is much more disturbing.  Well, it is October here so you might have been expecting some degree of horror on the blog.

The Book continues to torture us with Jerry Lewis movies.  I have no idea why.  Jerry Lewis is a cultural icon, so I understand having one film on the list.  But to continue to make me watch these films is such a gross exploitation of power!  Anyway, hopefully this is the last one…

Jerry Lewis does a funny voice and crosses his eye a lot acts and directs in this film.  He is a nerd who aspires to be loved by one of his students, Stella.  He develops a drug that makes him into a more attractive jackass.  And since women love jackasses, it works!  And in one scene he dresses up like a baby and does a baby voice.

Just ugh.  The only reason I am giving it a couple stars is because it was never that boring or outright offensive.  My bar has become considerably lower after watching so many movies.

Buddy Love was rumored to be a spoof of Dean Martin.