392. The Man Who Shot Liberty Valance

The Man Who Shot Liberty Valance
1962
Directed by John Ford 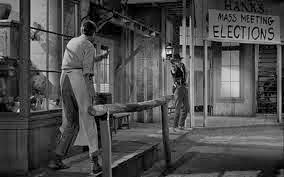 This is one of my favorite westerns of all time and even though both Jimmy Stewart and John Wayne are getting a little too old for their roles, this is a perfect film.

Lee Marvin, in typical Lee Marvin jackass fashion, is Liberty Valance, an outlaw who is killed after a gunfight with Stoddard (Stewart).  Stoddard must deal with the notoriety that comes with having killed a man and does his best to make it in politics and get the girl as well.

In the past, I have been hard on Wayne for his wooden performances but he actually is spectacular in this film as a character who is slowly losing everything but still has a good heart.  And you don't get a better bad guy than Lee Marvin; he is easier to hate than all the Real Housewives put together!

A brilliant film and one that needs to be seen by everyone.  Sorry for the short review but I have about five of these to crank out and I want to catch up on all my blogs today.

Filmed on a soundstage.

Was shot in black and white to hide Wayne's and Stewart's ages.