393. What Ever Happened To Baby Jane?

What Ever Happened To Baby Jane?
1962
Directed by Robert Aldrich 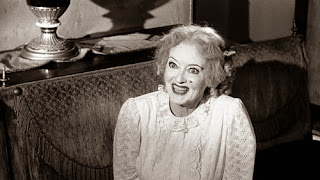 I remember watching this movie alone in my house when I was younger and quickly realizing that I had made a horrible mistake.  I then stopped it until my mom came home and she was just as frightened as I was when she sat down to watch it with me.  This film is creepy as hell but a great movie to watch with Halloween coming up!

Baby Jane Hudson was a big star child while her sister was largely was largely overlooked.  That changed when they became older and Blanche became the glamorous star while all of Jane's movies were commercial failures.  A mysterious accident left Blanche crippled and entirely dependent on her crazy sister who is pretty much a more delusional Annie Wilkes.

So like I said, this movie is creepy as all get out.  The worst moment for me was when Jane just laughs and laughs after serving her sister a cooked rat.  My sister was terrified by the bird's eye view shot of Blanche knocking herself off the walls in her wheelchair.  And, of course, when there are dolls of any kind involved everything gets ten times scarier.

Everyone knows about the famous Davis and Crawford dispute and although it must have been hell to work with them, the hate and jealousy that they had for each other was perfect for their characters.

So one of my favorite horror films and one that might get another viewing this coming Halloween!

Bette Davis was nominated for an Oscar for this film.  Joan Crawford heavily supported Anne Bancroft for the win out of spite.

Bette Davis said that she imagined Jane would never remove her make up and would just keep adding layer after layer to make herself look younger.  This is the look that is in the film.

Hold on to your butts, as Samuel Jackson would say. Trailer: