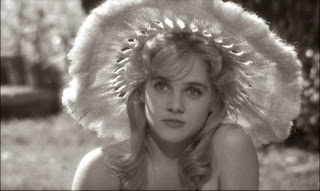 I saw this film awhile ago when I was going through my Maybe-I-Should-Give-Stanley-Kubrik-A-Chance-And-Not-Just-Write-Him-Off-As-The-Most-Boring-Director-Known-To-Man phase.  And while I didn't hate this film, it is certainly not a favorite.

This story is based off of everyone's (especially the Russians) favorite premise: older man falls in love with a really young girl.  One of my all time favorite movies, American Beauty, is also based on this story, although Sam Mendes does it a lot better than Kubrick.  However, that is a story for a different time.

The movie's tagline is "how did they ever make a movie out of Lolita?"  Well, they did it, just not very well.  Now, this isn't necessarily anyone's fault; the censors were so strict that they couldn't even really suggest a sexual relationship between Lolita and Humbert.  But that fact is without those clues, I had a hard time figuring out what was going on.  It seemed to me that Humbert just acted as a father to her, albeit while he repressed his sexual desire for her.  But did he suppress it?  Who knows.

So maybe Kubrick's hands were tied when it came to telling their story.  But there are ways around the censors.  Do we all remember the end of The Thin Man?

Add to the fact that this was supposed to be a dark comedy and I didn't find any of it remotely funny and we have a film that I did not enjoy in the slightest.  I do love me some James Mason, though.

800 girls auditioned for the role of Lolita.

Sue Lyon was chosen for the role mostly because she had large breasts.

Cary Grant was offered the role of Humbert Humbert first.