The Hustler
1961
Directed by Robert Rossen 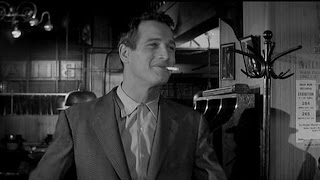 This is a film that my family has loved for a long time.  We actually had posters of this film right next to our pool table in the house that I grew up in.  I suppose we believed that that would make us as cool as Paul Newman when we played pool.  It didn't.

Paul Newman plays Fast Eddie Felson, a pool hustler who is determined to beat Minnesota Fats (god I love these names).  Along the way, he meets Sarah, a girl who has some, um, issues.

This is a fantastic gritty film that will make anyone who watches want to go out and buy a pool stick.  This could have easily been an extremely dull movie; I mean 134 minutes of pool playing could have gotten old fast.  Paul Newman manages to keep his character real and interesting throughout the duration of the film.  I don't know if it is his innate awesomeness or the great chemistry he had with the others actors but the result was fantastic.

As for Sarah, I can't talk too much about her without giving too much away.  Suffice to say, you don't see a lot of characters like her.

All of the pool shots except for one were shot by the actors.

One of the few early Hollywood movies to have a pre credits sequence.