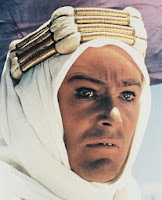 I remember when my sister first saw this movie in a film analysis class she said it was the most boring movie of all time and it was a constant struggle to stay awake.  Naturally, I dreaded it and since my sister are pretty much the same person, I hated it too.

I feel like I have been saying that every movie lately is horribly boring.  This makes me seem like I am not easily entertained.  I assure you that is not the case; a rubber pencil can keep me entertained fora half hour.  However, this is another snorefest but at least that is a popular opinion.

This is the story of T. E. Lawrence's life during World War I.  Blah blah blah.  I don't know if it was the length or the subject matter but I fell asleep twice during viewing.  And if I hadn't been watching the time the entire film, I wouldn't have noticed.

That being said, this is a beautiful movie.  You can just see from the above picture how fantastic the colors look in this film.

There, I gave it some praise so I don't completely fail.

No women in the film have speaking roles.