West Side Story
1961
Directed by Robert Wise and Jerome Robbins 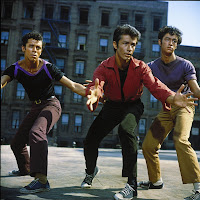 This is one of my favorite films and I have seen it an embarrassing amount of times.  Rarely have I seen a musical where I adore every single song, where the actors have this much charisma, and the story moves along so nicely.  I even forced my guy friend to watch it, but he couldn't get over how all the straight men were dancing so gaily.  Ironically, he turned out to be gay.  Huh.

A lot of people complain about the performances of Natalie Wood and Richard Beymer.  Granted, Wood isn't exactly a convincing Puerto Rican.  However, I enjoyed their musical numbers were some of my favorites in the film.  Judge for yourself:

Of course, Rita Moreno and George Chakiris steal the show, but that doesn't mean that the lead performances were terrible.

I really don't have a single negative thing to say about it.  Besides being a wonderful musical, it is also an enlightening comment on immigrant life in New York.  Definitely a must see.

The rival gangs were encouraged to play pranks on each other behind the scenes in order to keep the rivalry real.