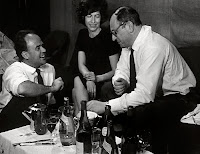 I am sorry that it took so long for me to put up this post.  This was a really hard movie to find and I was only able to get a copy on Amazon, which I hate doing because then I accumulate a collection of movies that I don't necessarily like.  And unfortunately, this film falls into that category.

At the beginning of the film, we are introduced to a cast of real life people.  Throughout the movie, they discuss the French way of life at that time.  At the end of the movie, the cast watches the footage and evaluates if they were real in front of the camera or not.


Why am I having such a hard time with the sixties?  Honestly, I feel like every review I have written lately has been a rant.  There are some good ones coming up so I suppose we just have to weather this storm.  Here comes some more rain…

I really expected to love this movie and I was surprised when I found myself bored out of my mind.  I suppose part of the reason I didn't care for this film was that it was merely an experiment by Rouch and Morin to see if people could be real on camera.  It wasn't really meant to be entertaining and believe me, it wasn't.

I think I expected to love it because I enjoy watching conversations on film, even if they have nothing to do with the storyline (i.e. Diner or any Quentin Taratino movie).  I guess I have to remember that as realistic as those conversations seem, they are coming from a script and normal people simply aren't that interesting: a lesson that dating has taught me time and again.

The term cinema verite was coined by Rouch after filming this movie.