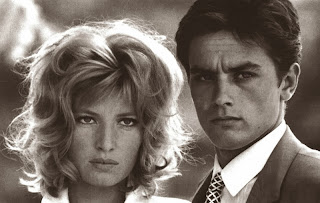 When I sat down with this movie last night alone with a bowl of Easy Mac and Pringles, I thought it was going to be a great evening.  Hm, maybe I will cut out that first sentence since it is beyond pathetic.  So, big shocker, Antonioni produces another major snore and once again, I am wishing that I had never seen any of his movies.

The story starts with Vittoria breaking up with Riccardo, saying that she doesn't love him anymore.
I could have done this scene in maybe like three minutes but with all the awkward pauses, it lasted a lot longer than that.  Also, none of these actors have any chemistry.  At one point, one of the guys says "I am going to kiss you now" in the same tone you would say "I have to go get a root canal".  But I digress.  Anyway, she falls in love (I think) with Piero.  Oh yeah and there is a really racist scene which I think is a tiny bit self aware, but I am not sure.

I really wish we would just be finished with this director because I am getting sick of the feeble "I was really bored"  defense.  However, in this film I can point to the acting as well.  I felt like they were zombies moving on the screen.  Now, I understand Vittoria's depression and as that is something I have struggled with, I realized that the actress isn't exactly going to be dancing around during the film.  However, her portrayal was not at all interesting and just because you make no facial expressions doesn't mean you are a good actress.

I would have to say the most fascinating part of this movie is when Vittoria picks up a pen with a woman on it.  Depending on how you hold it, the girl changes outfits.  I would have rather watched that pen for two hours.

According to Martin Scorsese, this is the boldest movie in the trilogy.  Oh come on.