Sanma no aji
An Autumn Afternoon
1962
Directed by Yasujiro Ozu 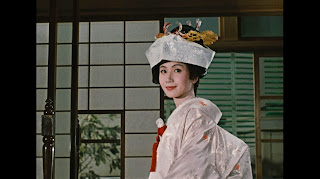 Today we are finishing the Ozu movies, which for me is a relief since I find most of his movies quite dull.  I apologize for not writing sooner but since I no longer have DVDs sent to me through Netflix, getting some of these films has been a bit of a challenge.

I really wish I was the kind of person who enjoyed this movies.  In The Elegance of the Hedgehog, the main character drinks tea as she watches Floating Weeds.  I guess I am 0 for 2 because I hate tea.  My version would be drinking Diet Coke while watching Taratino movies.  That is a lot less poetic.

Anyway, this is the story of Shuhei and his children.  Shuhei has a drinking problem and ends up relying heavily on his daughter for support, even though everyone encourages him to marry her off.  Shuhei also has a son who is a total leech, but that is more of a subplot.

The main reason I disliked this movie would count as a spoiler and since I don't have spoilers on this site, I have to refrain from mentioning it.  This, of course, makes for a somewhat crappy review.  I guess I can add that the movie relies heavily on dialogue and there is very little plot here.  While I find that acceptable when the dialogue blows me away, I just was not that impressed.

So we say farewell to Ozu, who was never really my cup of Diet Coke.

The camera remains completely static throughout the movie.