Campanadas a Medianoche
Chimes at Midnight
1965
Directed by Orson Welles 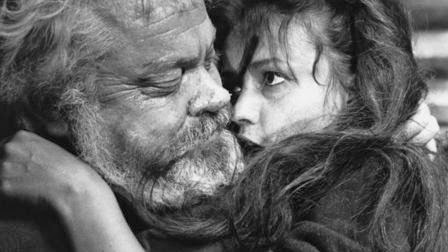 I was really confused when I started this movie?  A Spanish Orson Welles movie?  The title Chimes at Midnight sounds like a Chinese romance.  However, once I realized that it was an adaptation of Henry IV, I rejoiced with nerdy excitement.

I should start by explaining that I love Shakespeare and have never found a play I haven't liked.  Nearly all my friends are crazy about him and the worst argument I ever have gotten into with my friend Dan was when I said that the St. Crispin's Day was not the best speech in history of the world.  However, I completely understand if Shakespeare isn't your jam, which is a shame, because there a quite a few of them in The Book.

Orson Welle plays an extremely large Falstaff, who is Prince Hal's friend.  Prince Hal fucks around a lot, but claims that he is simply playing the part of a screw up until he becomes King.  I think Prince Hal is a fascinating character, simply because you never know if he is bullshitting or not.  Anyway, Hotspur, who is an equally interesting man, wants to overthrow the current ruler.

I have actually analyzed this play to death since we read it in a Shakespeare class I took in college.  However, this is a film blog, so I should probably stick to talking about the cinematic aspects of this story.

Orson Welles is entering his slightly odd, slightly blimp-ish phase here and we see quite a bit that here.    The directing is still excellent but the acting bordered on hammish sometimes.  Otherwise, it was a pretty faithful adaptation and one that I enjoyed.

Orson Welles' favorite of his films.