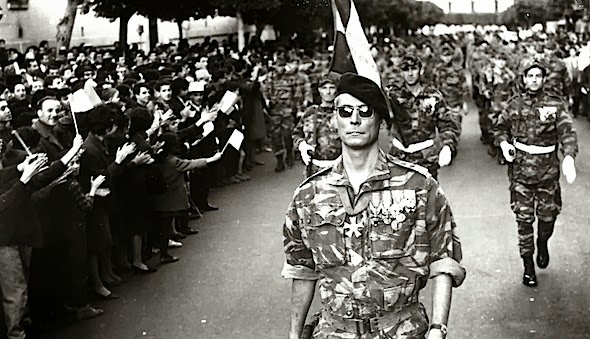 I sat in front of the computer for a ridiculously long time before I wrote this review.  On the one hand, this isn't a really enjoyable film (nor should it be, considering the subject matter) and I am assuming that most people (including myself) watch a film to be entertained.  On the other hand, I would definitely agree that is a must see movie.

In short, this film covers the events that happened during the war for Algerian independence from 1954 to 1957.  The story centers on the character Ali la Pointe, but honestly, I kept forgetting about him with everything else that was going on.  Terrorist attacks and torture are shown and there were quite a few times that I wanted to turn off the computer and never turn it on again.  Of course, it is nothing next to some of the shit The Book has put me through but it is still really disturbing.

I don't think we ever covered Algerian independence specifically in high school, but we learned enough about African colonization to know that it was a giant shit show, as demonstrated with this film.

Now, if the goal of the filmmakers was to educate us about the atrocities that were committed by both sides of this conflict, they did a fantastic job.  If their goal was to make a thrilling and entertaining movie...well, not so much.  Still, a must watch.

Banned in France until 1974 and only released in a cut form.

French numbers report that there may have been up to one million loyalists in Algeria at that time.  They are not portrayed in the film.