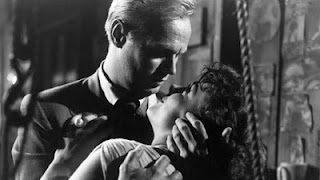 So basically a woman is transporting a microfilm for communists when her bag is pick pocketed (did I just make up that term?).  Skip McCoy, the thief, discovers what he has and attempts to blackmail the communists.  That is, until a special dame enters his life.

Of course, this is a propaganda film.  This might seem like it would be annoying but it is actually more violent than you would expect, probably because the commies are on the receiving end of the punches.

So you have the annoying woman who gets punched in the face, blackmailed, and yelled at by Skip.  Naturally, she falls in love with him.  What is that??  The feminist in me is having a hard time coping with these early fifties women.  Can't wait for Kill Bill…

There is, however, an outstanding performance by Thelma Ritter as Mo, a snitch for the police that everybody likes.

So overall a fun film, one that is laughable and entertaining at the same time.

Marilyn Monroe read for the part of Candy but was thought to be too sexy for the role.

Betty Grable was originally going to play the part of Candy but demanded a dance number in the film.  Since that would be…ahem…somewhat out of place, Fuller refused.
Posted by Amanda at 1:59 PM