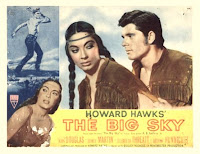 I have about forty five minutes before I have to leave for the day and I am still in my pajamas.  Instead of getting ready now and not feeling rushed, I am choosing to write this review and then run around in a rage because I will be late.  Maybe I will take it out on fellow drivers.  Who knows?

Anyway, I have mentioned this before but for some reason, early fifties films have been really hard to find.  I could only find this one on xfinity on demand.  I chose to watch this with my parents.  Shut up; I know I do this a lot.

The Big Sky opens with this really weird narration about the events.  I am still not sure who it was.  Anyway, the film centers on Kirk Douglas and Dewey Martin as they travel a river with a bunch of misfits.  Of course, a dame gets in the way of their camaraderie.  Women suck.

I hated this film.  It was extremely long and boring.  I think we were supposed to grow really attached to the characters but I found myself wishing they would all drown.  Sick, right?

Then, of course, the question is why a sucky western is listed in the top 1001 movies of all time.  For one thing, the girl is Native American and is actually shown in a somewhat positive light, which is refreshing.  Half the cast speaks French and the story is about a river trip, which I suppose is unusual for westerns.  Still, totally not worth the $2.99 that my parents paid for it.

John Wayne was originally supposed to do the finger scene in one of his earlier films.

The part of Boone was originally supposed to go to Montgomery Clift but he turned it down.  Instead, we were stuck with Dewey Martin.  Ugh.
Posted by Amanda at 6:23 AM