248. The Bad and The Beautiful

The Bad and The Beautiful
1952
Directed by Vincente Minnelli 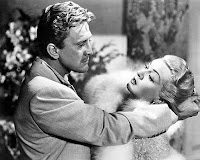 I watched this is in the fall with my sister; I have had a grudge against it since a question from it lost me a game of TCM Scene It?.  I always have tons of fun watching films with my sister and I remember the experience a lot more because of it.  I really have to stop watching so many movies alone…

Anyway, this is a fantastic movie.  It centers on Kirk Douglas, who is a studio head who has someone manage to ruin three people's lives in creative ways.  They are asked to do a movie with him again and the story is shown in flashback from three different points of view (Rashomon anyone?).

Of course, Kirk Douglas is fabulous, he always is. Lana Turner, on the other hand, is little more than eye candy.  All I can think of when I see her is how her daughter killed her lover.  That is kind of distracting.

I always like movies that are about Hollywood, especially ones that show us what happens beneath the glitz and glamour.  An awesome film that is still relevant today.

The fictional low budget horror film was based off of Cat People.  Saw it!

Holds the record for most amount of Academy Awards without being nominated for Best Picture.

Kathleen Freeman's character was based off of Alfred Hitchcock's wife.
Posted by Amanda at 10:23 AM