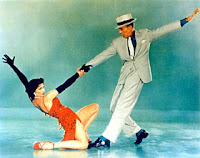 This is a very typical Technicolor musical.  Fred Astaire is an aged "song and dance" man who is trying to put on a new show with an upcoming ballerina.  Angry tap numbers ensue.

So the plot isn't very original.  Still, this film is just plain fun; we get great musicals numbers, shameless optimism, and catchy songs.  It actually reminded me of the old Busby Berkley films I used to watch with the whole "the show must go on" mentality.  Of course, the numbers aren't as good as Berkley numbers but that is an absurdly standard.

In addition, there is a really cool surreal film noir scene which, while really weird, is entertaining.  And that's the whole point of this movie, merely to entertain.  And quite frankly, that is a relief after the emotional roller coaster I have been expected to ride with these last couple of films.

The movie reflected real life in that Fred Astaire really did feel washed up and was considering retirement.

Fred Astaire and Cyd Charisse are the exact same height and weight.