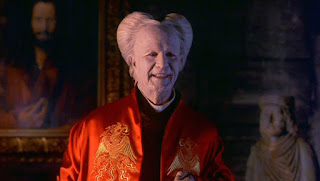 There are some people that absolutely love camp in their horror movies. I am not one of those people. If it were up to me, Jordan Peele and James Wan would direct every scary film from now on. But Francis Ford Coppola always has to go big (in a bankrupt-the-studio kind of way) so camp wins.
The story of Dracula has been told many times...by me, who has recounted it twice for the movie blog, and once for the book blog. So I'll shake things up by just pointing out where this movie diverges from other retellings. In this version, Dracula's wife Juliet-ed herself when she received an erroneous report that Dracula died in battle. After he is told by a priest his wife will go to hell for committing suicide, he renounces God and vows to get revenge (on whom?) with all the powers of darkness. He becomes obsessed with Mina because she reminds him of his lost love.
So I suppose enough has been made of the accents in this movie, but man, that's a tough thing to gloss over. I can only imagine what British people thought when they heard Winona Ryder and Keanu Reeves attempting the accent. Reeves was clearly out of his element here, which you think would translate well into a character that is famously out of his element...but it didn't.
The dialogue is also ridiculous at times ("I never drink...wine"). But gothic horror is always over the top and melodramatic. So they nailed that well enough. But I still cringed my way through it.
RATING: **---

Gary Oldman had a singing coach teach him how to lower his voice an octave.
Coppola wanted Johnny Depp to play the role of Jonathan Harker, but the studio wanted someone who was more of a heartthrob.  Um.
Coppola made the entire cast do a table read of the novel in order to get the feel of thing.
Posted by Amanda at 2:33 PM