The Devils
1971
Directed by Ken Russell 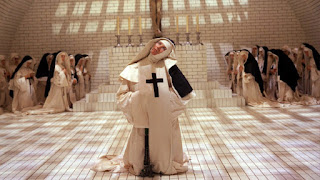 In honor of the spookiest month of the year, I will be reviewing horror movies for all of October. But because I am nearing the end of the List, my choices are somewhat limited. I'm not going to lie to you, some of these might be a stretch. But I think The Devils is a solid choice. Anything that has nuns fits the bill in my opinion.
The Devils is based on an Aldous Huxley novel, which recounts the events of the "Loudun Possessions." These "possessions" took place in 1634 France. A convent of nuns went batshit crazy and accused a priest of summoning evil spirits. The film is a, um, loose adaptation of those events.
I began this film thinking it was going to be some sort of John Waters-esque nightmare. One of those movies that desires nothing more than to shock and disgust its audience. I get no pleasure out of those kind of movies, because there is enough to shock and disgust me in the real world. But the story of the Loudun Possessions can't be told in a straightforward way. It's just too bizarre.
Of course, that didn't make it easy to watch. Actually, it was pretty brutal, and it's not something I ever want to see again. Still, it had style as well as substance.
RATING: **---
Interesting Facts:
Banned in Italy.
A scene of naked nuns sexually defiling a statue of Christ were removed by Warner Bros.
Posted by Amanda at 1:11 PM