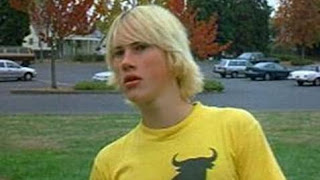 Since I have exhausted all the horror movies on the List, we must content ourselves with uber disturbing films for the remainder of Spooktober. Elephant, which is about a school shooting, certainly falls into that category. Should make for a really fun month.
So like I said, this film chronicles the events surrounding a school shooting in Portland, Oregon, that is heavily based on the Columbine shooting. It has the disconcerting feel of being a documentary.
Americans have to live with the fear of school shootings everyday, or at least we did until COVID-19 (hurray for progress!).  It's not a subject you want to live in for a movie's runtime. I also think there is something to what Sue Klebold, Dylan Klebold's mother, says. These kind of movies perpetuate the myth of Columbine. I was deeply uncomfortable with some of the specific details they chose to include that were clearly in reference to Columbine. It almost felt like an homage.
I get that the point of the movie was to make you feel unsettled, and possibly complicit in whatever violence you witnessed.  They effectively built up to a brutal climax very slowly. I mean really slowly. That piano scene went on forever. But I could have done without watching this one.
RATING: **---

Much of the movie was improvised.
Based on a short story by Harmony Korine and a friend of Gus Van Sant. I'm surprised the List hasn't forced Korine on us more. My film professors loved him.
Posted by Amanda at 6:00 AM