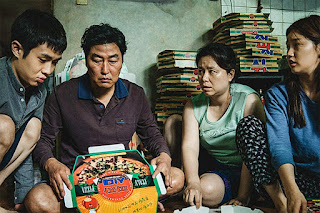 This was pretty much a shoo-in for the updated edition and it's easy to see why. This movie is so damn good that it even persuades Americans to watch a movie with subtitles, which is no mean feat.
The Kim family lives in a crowded basement apartment and fold pizza boxes to make ends meet. The son, Ki-woo poses as a university student in order to get a job tutoring Da-hye, the daughter of the wealthy Park family. The Kim family slowly and insidiously recommend each other as highly qualified servants until they are all employed by the Parks. I'll stop there, as I like to remain a spoiler free zone and this movie makes it difficult not to give too much away.
Perhaps Parasite doesn't qualify as a horror movie in the strictest sense, but it does what great horror movies do: tell an unsettling story while providing social commentary in an unobtrusive way. Korean movies in general are very occupied by class, and it was interesting to see this given a horror movie context.

It might be more accurate to label this a black comedy, and the humor of the story makes it hard not to root for the Kims. The movie really builds to a satisfying and unexpected (to me at least) ending. Definitely deserving of its Best Picture win.
RATING: *****
Interesting Facts:
12th film to be nominated for Best Picture without being nominated for any acting categories.
The Parks' house was built from scratch for the movie.
Posted by Amanda at 8:14 AM