The Lighthouse
2019
Directed by Robert Eggers 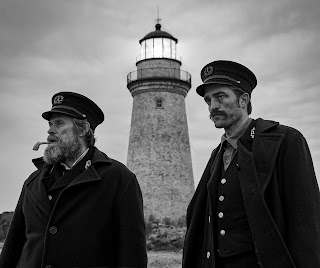 The 2020 edition of the List has been officially released (RIP "only 100 left" milestone), and we can all praise Xenu that The Irishman was not included. My boyfriend and I actually watched The Lighthouse a couple weeks ago (his idea, not mine), and it just so happens to fall under the category of Spooktober watches.
In the late 19th century, two lighthouse keepers serve on an isolated island off the coast of New England. Thomas Wake is a cranky old salt who is weirdly protective of the beacon and likes his lobster cooked a certain way, dammit. His underling Ephraim Winslow is former tinderman who begins to see things even stranger than Willem Defoe.
My boyfriend expressed surprise that I didn't like this, which is a real wake up call about how I present myself. Personally, I didn't enjoy watching these two try to win their Oscars with their random outbursts and carefully constructed accents. I am sure there will be many college essays penned that unpack all the symbolism in this movie, and I am just glad I don't have to write one.
It might have been fairly interesting to read if it were a play, but as a film I wasn't particularly engaged. And as a horror movie, it's dismal.
RATING: **---

Interesting Facts:
The design of the mermaid's genitals was based on shark labias.
For dialogue inspiration, the Egger brothers read Herman Melville and Robert Louis Stevenson.
Posted by Amanda at 3:38 PM