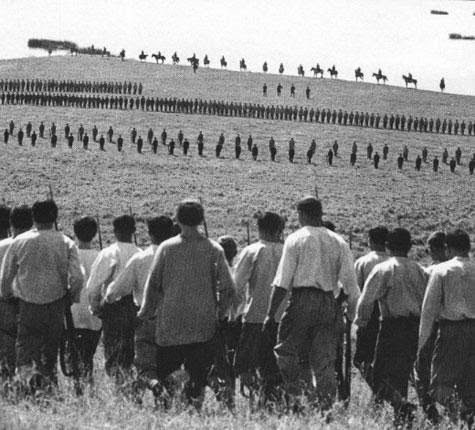 I am recovering from surgery so I should probably be sleeping right now since it is 11:27.  However, I am determined to get caught up on this blog before I go to bed.  Actually, it is quite easy to stay awake when it feels like someone is squeezing your ankle ridiculously hard.  Who would have thought?

This movie follows the 1919 battle between in the Communists and the Czarists in Russia.  The plot is extremely hard to understand.  Usually when I have no idea what is going on in a film, it is because I completely zone out, which is something I always own.  I am happy to say, however, my lack of understanding with this film wasn't my fault.  Lots of shots are done at a distance so you cannot see what is going on.  I really couldn't even tell you who the main characters are or what happened.

Surprisingly, I didn't hate it.  I usually need a good story, which this film certainly did not have.  However, I wasn't really watching the clock at all and believe me, I get bored easily.  Maybe I was so relieved that it wasn't the same old war film that I have seen a thousand times.  Possibly I liked it because I have always been interested in that time period in Russia.  Or maybe the cinematography was so beautiful that it distracted me enough so I wasn't bored.

In any case, it was worth a watch and I am excited to hear everyone's thoughts on it.

Banned in Russia.
Posted by Amanda at 8:53 PM