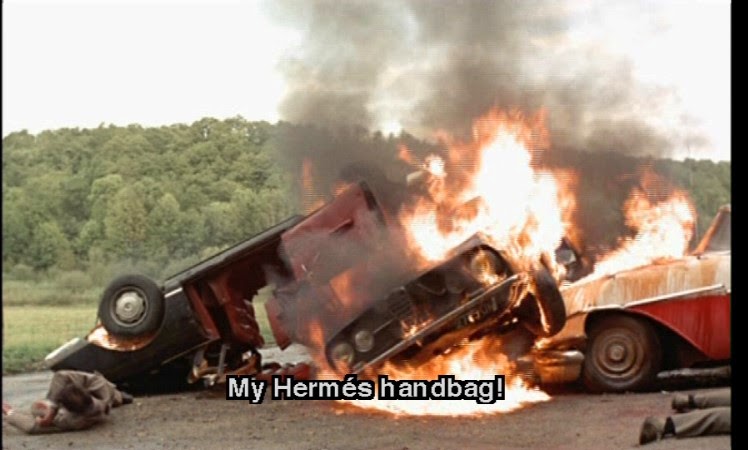 Here we are again with yet another Godard, which in my opinion are getting progressively worse.  Let's see how this one fares.

A husband and a wife are both planning each other's murders with their respective lovers.  They set out by car to visit the wife's dying father in order to secure her inheritance. Um, then some other stuff happens.  See above picture.

This film involves one of the most famous tracking shots in movie history, which even I have to admit was pretty fantastic.  For seven minutes, the camera follows a traffic jam in one long shot that is an absolute beautiful piece of filmmaking.   There, I was nice.

I am getting bored with my own complaints, but unfortunately for all of us, The Book is obsessed with this guy.  I like plot and character development and those two things are very rarely present in Godard's films.  We get a bit of a plot here but absolutely no explanation on why these characters are seemingly losing their minds.  I suppose since this is kind of a screwball comedy, no one really deemed explanations necessary.

You know I never give away movie endings, but what the hell was with the last five minutes?  Dear God-ard, are we done with this guy yet?  I have to go cleanse my palate.