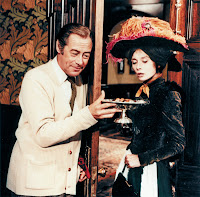 Happy New Year, everybody.  It is 12:03 right now and I want to get this post written before I go to bed.  Mostly because I had too much caffeine and there are annoying fireworks outside but also because this is going to be a great blogging year and I want to get started right away.

This is one of those movies that I know I should love but I can't get behind.  I love musicals, makeover stories, and George Bernard Shaw.  But this film just lacks in every area, from the acting to the musical numbers.  In fact, The Book notes that there is a large amount of dead time in the film.  If The Book actually admits that something is boring (it maintains that Apocalypse Now is not) than you can bet it is going to be dull.

Eliza Doolittle is a street urchin that sells flowers.  Henry Higgins comes along and is affected, not by the obvious squalor that Eliza and her friends live in, but how freaking annoying her Cockney accent is.  He vows to fix her in the most condescending manner possible, while simultaneously taking all the fun out of a musical by speaking all of his songs.

I have already voiced my opinion on Audrey Hepburn acting skills so I will not rip on her anymore, lest a horde of teenage girls show up with pitchforks at my door.  I actually did enjoy a few songs but a lot of them weren't good enough to be included if they didn't at least move the story along.  I also felt like the film was trying to push Eliza and Henry together romantically when it is quite clear that Henry is gay.  Now, I know I can't really fault them for that since it was a different time but Eliza is in for quite an unpleasant surprise.

It is such a classic that you should probably see it but there are such better musicals out there!  Oh well, on to the next one.

Henry Higgins' character was considered too intellectual to sing his songs.  Buzz kill.

Audrey Hepburn was 35 years old while her character was supposed to be 19.

My favorite song of the movie: