The Servant
1963
Directed by Joseph Losey 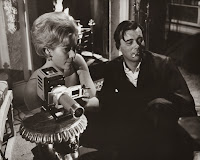 Merry Christmas, everybody! I hope everyone had a great holiday like I did (I walked away with puzzles and a portrait of James Marsters so I did quite well).  Let's all talk about more terrible movies, shall we?

It is clear from the very beginning what the purpose of this film is.  The servant becomes the master, the master becomes the servant, etc.  Unfortunately, it's pretty dull.

Tony hires Hugo to be his manservant.  Hugo also gets his lover/pretend sister hired as a maid.  Tony's girlfriend hates Hugo, but he doesn't listen, presumably because bitches be cray.

I will give credit where credit is due.  The acting was absolutely fantastic.  Dirk Bogarde was incredibly creepy and did a fantastic job of being both insidious and a gentleman.  I think there were lots of homosexual undertones in the novel that were completely lost on film.  This is unfortunate, because that probably would have made the story a lot more interesting.

The characters' actions were completely improbable and the story was poorly paced.  Thumbs down.

Dirk Bogarde took over as a director when Losey fell ill.