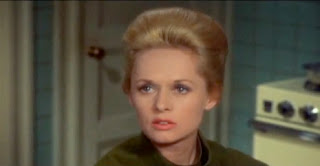 I generally hate any film that has rape in it.  It always leaves me shaken up and so horrified that I can't really enjoy the rest of the movie.  Now, this statement might lean on the annoying side, but I feel like men can't really understand.  I have watched men watch rape scenes, and although they are of course disgusted, it doesn't seem to affect them in the visceral way that it does with women.  They can look past it and focus on the movie as a whole or think about the context but all I can think, and this is true for all the women that I know, is "I hate this, I hate this, I hate this".  Now, I could of course be wrong but that is what I have observed.  Unfortunately, as soon as I saw the rape in this movie (and yes, that was rape, even if it wasn't as violent as the act usually is) I checked out, especially considering Sean Connery's attitude toward women in real life.

Marnie is a thief who steals from Mark Rutland, who tells her that she has to marry him or he will go to the police.  This could be an intriguing premise, but it is told in a rather inappropriately silly manner so any promised effect that the story presented was lost.

As frequent readers know, I try to be a spoiler free site, so I won't say why I thought the explanation at the end about why Marnie fears the color red is preposterous.  I would say find out yourself, but I would highly recommend skipping this film, lest it ruin your opinion of both Sean Connery and Alfred Hitchcock.

Evan Hunter, the screenwriter, was fired by Hitchcock for wanting to take out the rape scene.

Grace Kelly was originally supposed to star in this film but the citizens of Monaco did not want their princess to portray a thief.

HITCHCOCK RADAR: Around the five minute mark, he passes Marnie in the hotel.